What’s Going On In There?

Home Brain Development What’s Going On In There?

What’s Going On In There?

When I started my teaching career, 25 years ago, everyone believed that the left side of the brain was responsible for logic and math, and the right side was for music, art and all things creative. You were either one or the other. But thanks to research that started with Frances Rauscher and an article in Time Magazine in February of 1997 to the researchers of today, we now know that music is the one activity that activates the whole brain!

The brain scan, below, is from a study that was conducted several years ago on concert pianists, who were asked to play a piece of music so familiar to them, they could play it in their sleep. What you see here is that when they play that music, practically their entire brains light up with activity! 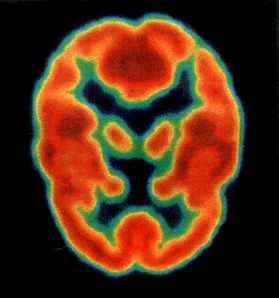 What exactly is happening inside our heads when we are engaged in music? Here’s what groundbreaking researcher and author of This is Your Brain on Music, Daniel Levitin has found…

“Playing an instrument requires the orchestration of regions in our primitive, reptilian brain – the cerebellum and the brain stem – as well as higher cognitive systems such as the motor cortex and the planning regions of our frontal lobes, the most advanced region of the brain.

Listening to music starts with subcortical structures—the cochlear nuclei, the brain stem, the cerebellum—and then moves up to the auditory cortices on both sides of the brain.

Following along with music that you know recruits additional regions of the brain, including the hippocampus—our memory center—and subsections of the frontal lobe, particularly a region called inferior frontal cortex, which is in the lower parts of the frontal lobe (ie. closer to your chin than to the top of your head).

Tapping along with music, either actually or just in your mind, involves the cerebellum’s timing circuits.

Performing music—regardless of what instrument you play, or whether you sing or conduct—involves the frontal lobes again for the planning of your behavior, as well as the motor cortex in the posterior part of the frontal lobe just underneath the top of your head, and the sensory cortex, which provides the tactile feedback that you have pressed the right key on your instrument, or moved the baton where you thought you did.

Reading music involves the visual cortex, in the back of your head in the occipital lobe.

Listening to or recalling lyrics invokes language centres, including Broca’s and Wernicke’s area, as well as other language centers in the temporal and frontal lobes.

At a deeper level, the emotions we experience in response to music involve structures deep in the primitive, reptilian regions of the cerebellum vermis, and the amygdala—the heart of the emotional processing in the cortex. In fact, when music brings out goosebumps or moves you to tears, it’s your amygdala that’s responsible!

It is interesting to note that the front portion of the corpus callosum—the mass of fibres connecting the two cerebral hemispheres—is significantly larger in musicians than in non-musicians, and particularly for musicians who began their training early. Think about that… if it’s larger, then the two sides of the brain can communicate faster and more efficiently. If music activates the whole brain, it needs a well-developed corpus callosum!” That is the very reason we do all those cross-lateral activities in Kindermusik!

So, keep on listening, tapping, singing, playing and enjoying music. It’s not just good for your child, it’s good for YOU, too!

Source: This Is Your Brain On Music: The Science of a Human Obsession, Daniel J. Levitin, 2006 www.yourbrainonmusic.com