The Benefits of Musical Experiences for Young Children

Home Uncategorized The Benefits of Musical Experiences for Young Children

The Benefits of Musical Experiences for Young Children

Have you ever noticed how musical young children seem to be? A baby in a highchair, barely able to sit up on her own, will slap her hands up and down when she hears music. At the point when a baby has learned to stand on his own, music will inspire him to bounce on his wobbly little legs, amazingly able to keep the beat for a short time before gleefully plunking down on his bottom, and then doing it all over again. Sometimes, he’ll stand and rock from side to side with his whole upper body in motion to the music, while clinging to the coffee table and the couch simultaneously and demonstrating a remarkable degree of balance and coordination. A crying infant will often settle when she hears music in her environment, particularly if someone with a close emotional attachment to her is singing. Combine that with movement, such as rocking and cuddling, and it becomes a powerful learning experience, even in the earliest days of life.
Many people say that the music lessons they took as a child didn’t take. But, research has shown that even a small exposure to music lessons taken in childhood creates neural circuits for music processing that are enhanced and more efficient than for those who lack training. Music lessons teach us to listen better, and they accelerate our ability to discern structure and form in music, making it easier for us to tell what music we like what we don’t like.
Did music play a role in the evolution of human beings? Daniel Levitin, author of This is Your Brain on Music says one theory is that music evolved in our species because it promoted cognitive development. “Music may be the activity that prepared our pre-human ancestors for speech communication, and for the very cognitive, representational flexibility necessary to become humans. Singing and instrumental activities might have helped our species to refine motor skills, paving the way for the development of the exquisitely fine muscle control required for vocal or signed speech. Because music is a complex activity, it may help prepare the developing infant for its mental life ahead. It shares many of the features of speech and it may form a way of practicing speech perception in a separate context. Rhythm stirs our bodies. Tonality and melody stir our brains. The coming together of rhythm and melody bridges our cerebellum (the motor control, primitive brain) and our cerebral cortex (the most evolved, human part of our brain).”
Research about music and child development is truly jaw-dropping. In the last couple of years, the eyes of the research community have turned increasingly to music, and the marvels and mysteries they have discovered are nothing short of amazing (though perhaps not exactly surprising to people who’ve regularly witnessed its effect). The bottom line: early, positive, age-appropriate experiences with music can have a remarkable and research-proven impact on learning, including language and literacy skills (e.g., vocabulary, comprehension, listening, and expression); social and emotional development; mathematics and pattern-recognition skills; and even ability to plan, guide, and self-regulate behaviour. 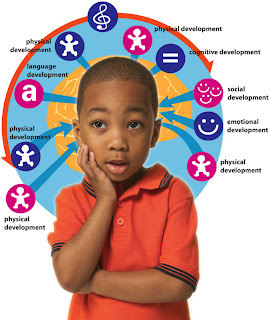 Music, combined with rhythmic motion, has been shown to aid development of the corpus callosum, the connection between the left and right hemispheres of the brain. Other studies have shown links between playing simple instruments at an early age and development of spatial reasoning and language skills.
Dr. Laurel Trainor and researchers at Hamilton’s McMaster University recently used magnetoencephalography brain-scanning technology to determine that children aged four to six who took music lessons showed more changes in brain activity than those who did not. Even the act of bouncing babies to the rhythm of music has been shown to help children compartmentalize and make sense of the world around them.
An independent study on Kindermusik specifically was recently conducted by Nina Kraus at Northwestern University’s Auditory Neuroscience Lab. It provides a fascinating look into how Kindermusik enhances your child’s language, math and social skills, preparing him/her for school readiness. To read about Northwestern’s research findings, click here.
For parents wondering when they should introduce their child to music, Prof. Lee Willingham, Coordinator of the Music Education Program at Wilfrid Laurier University, has a quick and easy answer: “There is no wrong time, except too late.”
Music has the power to inspire the soul, strengthen the family, and empower the child. Oh, wait… did I mention it’s FUN, too?!
SUGGESTED READING:
This is Your Brain on Music, by Daniel Levitin (Dutton, 2006).
Music With the Brain in Mind, by Eric Jensen (Corwin Press, 2000).
Good Music, Brighter Children, by Sharlene Habermeyer (Prima Lifestyles, 1999).
To Top