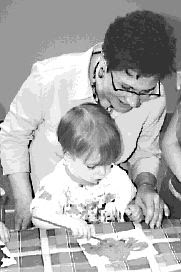 When it comes to enriching a child’s life with art and music, there are no such things as borders and barriers.

It’s a mindset that will serve Cambridge Kindermusik director Michelle Jacques well when she heads to South Africa next month to be a keynote speaker at a Kindermusik convention.

Now busily preparing lectures for her marathon talks, Jacques will address music educators there about working with challenged children and children who have difficulty coping with transitions.

She’ll also talk about how to create intergenerational connections by sharing the success of local programs that engage mothers and babies together with the elderly at seniors’ homes.

The theme of this year’s South African Kindermusik convention borrows from words of wisdom of Shakespeare: If music be the food of love, play on.

And although she will be working with some adults and children who don’t speak English, she knows the power music can have in breaking down barriers. 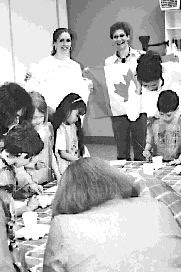 That fact will be extraordinarily evident during a planned visit to an orphanage in Soweto, outside of Johannesburg, during which she will work with about 40 children – aged two to six years – all of whom are HIV-positive.

Undaunted, she is looking forward to the chance to share her love for music, art and for working with children.

“With music, being a universal language, it’s not that hard to do a music lesson if they don’t speak English.”

To help create a lasting, creative impact, Jacques has planned an art exchange with the orphanage.

At right, Jacques holds up a Canadian flag alongside Jackie Harris, director of Kids Creations Art Studio, who shares Canadian images to inspire the children’s paintings. Harris suggested and organized the artful exchange. She will be moving her art program to the Kindermusik of Cambridge studio this summer.

Last week, she put the busy fingers of 40 Cambridge Kindermusik students to work, asking them to create paintings expressing what Canada means to them. Not only will she present the mini-masterpieces to the South African orphanage, Jacques will also bring 40 blank canvasses to allow children there a chance to create their own paintings to send back for Cambridge Kindermusik students. 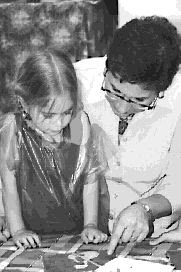 The paintings will be displayed as murals at Jacques’ Kindermusik studio in Cambridge and at the South African orphanage. Plaques will explain the story behind the meaningful exchange.

Left: Kindermusik director Michelle Jacques, who will soon travel to South Africa to speak at a Kindermusik conference, talks to four-year-old Emma Napier about her picture of a snowman, one of 40 child-created paintings to be presented to children in a South African orphanage.

Kindermusik, an internationally recognized program which has been operating for more than 25 years, employs instruments and music-based games and activities to boost children’s cognitive, physical, social skills and more.

During Kindermusik classes, educators lead parents and children through activities which also benefits parents by teaching them how to use the power of music to enhance a child’s development.

You can learn more about Jacques and her award-winning Kindermusik program by visiting her website at www.kindermusikcambridgekw.com