In a strife-ridden South African township, where children as young as two must learn to become self-reliant, there is a reason to scream – for bubbles… 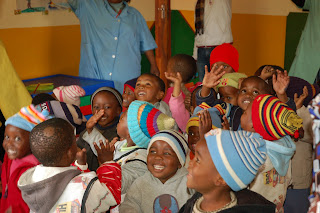 Blowing soapy bubbles – watching them float through the air and chasing them as they fall to the ground – is a favourite childhood game. But as Michelle Jacques, director of Cambridge’s Kindermusik found out during a recent trip to a Soweto day-orphanage, it’s not a simple pleasure shared by every child around the world.

As part of a two-week visit surrounding Kindermusik SA’s Annual Convention at which Jacques was the main speaker, she helped create unforgettable memories as she made music and blew bubbles for 29 impoverished children in the strife-ridden South African township. 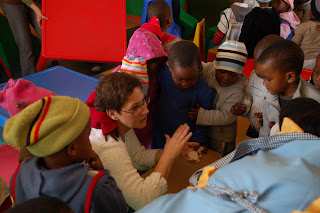 The excitement started when Jacques blew one bubble. And then she blew a few more. “All of a sudden they just started screaming with glee,” she recalled. “They’ve never seen bubbles in their lives. Those 29 faces just lit up as they reached for the bubbles.”

Even before embarking on the trip, Jacques expected it was going to tug at her deepest emotions, especially knowing what life is like for the children, many of whom are HIV-positive and whose families have perished in Africa’s AIDS epidemic.

During her visit to the orphanage, Jacques also provided the children with canvases to paint what their country meant to them. The art project was part of a cultural exchange with Cambridge Kindermusik students who used small canvases to convey what they feel about Canada. The works of the tiny Cambridge artists now adorn a wall at the Soweto orphanage and Jacques’ husband, Tim, who ventured to South Africa with his wife and their son Tyler, was busy recently hanging the orphans’ paintings at the Kindermusik of Cambridge studio on Sheldon Drive. 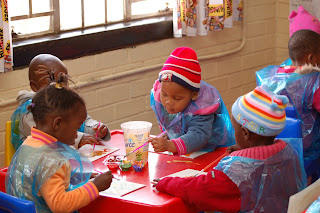 While the Cambridge children were well acquainted with the art of painting, it was a different matter at the South African orphanage, said Jacques. Having never seen paint before, the children didn’t know what to do with it and a couple of them tried to eat the paint right off the brush. They were even entertained by the painting smocks Jacques donated, enjoying the crinkling sounds of the plastic. They painted zebras and soccer balls, enjoying the process so much their miniature masterpieces started to become overwhelmed by abstract colour. 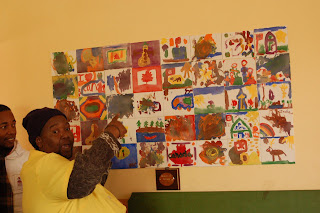 Rather than finding herself in tears as she anticipated, the music and arts director was instead uplifted by the strong spirit and appreciation exhibited by the children. “You would never know in a million years how miserable their existence was,” she explained. “They were so happy.”

The memory of the day will last a lifetime, according to Jacques. “At the end of the day, they all came up to hug me,” she said, noting that the 29-child hug almost knocked her off her feet.

The annual Kindermusik convention, which required Jacques to fulfill numerous speaking engagements, also included a stop at a centre for blind and severely burned children. Many South African children, she explained, fall victim to relentless field fires, which can strike at any time, especially during the driest of seasons. Although she and her family were just observers during a music program held for patients, the visit provided some profound experiences about South Africa, children and the power music possesses to help overcome fear and adversity.

There was a particularly powerful moment when her husband, Tim, joined in a “music train” during which the group danced together, formed in a single-file line, from smallest to tallest. One 14-year-old girl, believed to be the survivor of the most severe burns ever recorded, her facial features and even her hands burned away leaving nothing but wrist stumps, was placed at the line’s end so she could easily fall out of line should a moment of panic strike. Tim, enjoying the singing and dancing with the group, suddenly felt two arms make an effort to hold on to his sides. It was the girl, trying to engage in the group. Tears welled up in his eyes. “That was deeply moving that she trusted him enough to put her arms around him,” said Jacques reminiscing about the experience.

Capturing many of those moments on camera was Jacques’ son, Tyler.

Now back from the two-week trip, Jacques plans to share memories of the trip with Cambridge music students and their parents, and to create an annual fundraising initiative for the orphanage. Anyone interested in viewing the South African mural now hanging in her studio is welcome to drop by anytime during business hours. Just give them a call at 519-622-5702 to arrange a convenient time to visit.